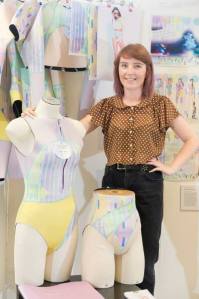 Emma Cheyne couldn’t be further from the coast if she tried having chosen to study at Leicester’s Demontfort University but, their Contour Fashion course is one of the best in the world and has turned out graduates who have achieved massive international success.

Emma’s final collection is called ‘Creatures from the Deep’. Who hasn’t felt like a creature from the deep getting out of the water after a hard session with hair all over their face? However, Emma’s thinking was more along the lines of beautiful aquamarine colours of the deep. Though, the  unintentional double meaning will ring true to many surfgirls!

I plan to meet Emma at the degree show but, unfortunately I have a skateboarding accident that leaves me housebound and it all goes belly up, literally. Emma kindly agrees to answer my questions via e mail and I’m going to meet her at Graduation. 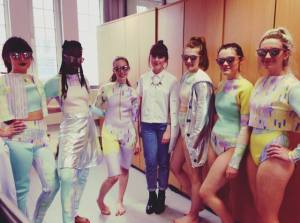 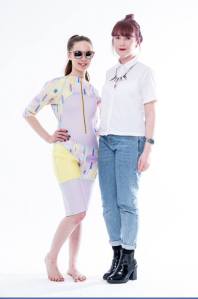 Did you grow up near the sea?   I grew up in Hull, East Yorkshire. About as far from popular British surfing towns as you can get!

When did you know you wanted to study fashion? I started studying textiles in year 7 or 8 at school and knew pretty soon after it was the area I wanted to go into. I didn’t discover the Contour course until I was actually applying for universities.

Are you a surfer or do water sports of some sort yourself? I’ve never surfed or done any sort of water sport in my life (unless manoeuvring a lilo across a busy pool counts?!) Although I am keen to have a go after this project!

What inspired this collection? I started looking into competitive swimwear at the beginning of my final major project, but decided to develop wetsuits and surf wear in particular after discovering a niche in the market for something that could perform technically without female surfers having to compromise on design and their personal styles. The initial inspiration for the aesthetic element of my collection came from photographs of an aquarium in my hometown – The Deep. I took inspiration for the panelling from the outer structure and my print designs came from my illustrations of the creatures inside.

What do you think of what’s on the market for women now? I was surprised by the lack of options on the market – most women’s styles were identical to men’s with only pink or turquoise details. What with the range of designers and brands like Nike x Liberty and Stella McCartney for Adidas producing on trend competitive sportswear these days I assumed the choice would be the same! I couldn’t get my head around the lack of inbuilt bust support either.

DMU Fashion and Contour has produced some world class talent – is this daunting or motivating? A bit of both! When I first started I could never imagine producing the sorts of things I was seeing in previous year’s final collections – I wouldn’t have known where to begin. But seeing where the course has taken people did motivate me to make the most of every opportunity.

What’s the dream for Emma Cheyne wetsuit designer?I want to work in the industry as a technical designer… I’d like to work for a global brand as I still have a lot to learn and I’m keen to travel! In terms of developing wetsuits, I want to try moulding the fabric and building in breast support so women don’t have to layer up with bikinis and sports bras. One day I’d love to see them produced using a body scanner and 3d printer for serious competitors, to make them really streamlined and give them a more personalised fit.

What are you doing this summer? Laying down, graduating and job hunting!

If you could go surfing anywhere in the world with anyone living or dead who and where would it be? I’d go somewhere like Hawaii because I’m a bit of a sun worshipper – though I’ve never been to Cornwall or Newquay and I’d like to go there too. I’d go with my friends who had to put up with me going on about odd things like surfer’s nipple, water flush and the difference between 2mm and 5mm neoprene for a good six months! And David Beckham.

I remember how sacry it was being 22 and coming out of  the bubble of University not having a clue what would happen or where I’d end up. Funny thing is 20 years later I still don’t.  Emma has studied one of the most highly regarded contour courses out there , as a non surfer but, highly skilled designer  she will be coming at this from a different perspective. She’ll be looking at pushing fabric, design and performance forward and I’ll be interested to see how her career develops.

Good luck for the future Emma! I hope one day we can take you surfing, keep in touch xx

Introducing people who are out there doing their thing, following their passion . Anybody looking for a platform to show what they are doing or fancies being introduced or girls trying to raise their profile for sponsorship or their business  please send me a message via the facebook page or to surfabella@gmail.com