Four weeks ago today I was waiting in a ridiculously long queue at passport control at East Midlands airport,  fresh off the plane with a glowing tan. I  had  been to Surfstar Morocco then met two of my oldest mates for a week in Fuerteventura.  I had a ball until the last few days when the shadow of what I was about to do descended.

Coming home from holiday this time was to be like no previous  home coming  as I was returning to a place I had never lived before. While I was on holiday, when I thought of home the picture was blank but, home was Wales now and it was confusing.  I had one last night in Leicester at my best mate’s house then I’d be off. New job, new town, new house. That night fear and doubt punched me in the gut, I was winded and I cried myself to sleep, quietly of course so he didn’t think I was bonkers.

I got up on Sunday morning and cried my leg off before I’d even got out of bed, I slipped out of the house to visit my girl BFF then came back to face the inevitable.  We had a last, silent cup of tea and it was time. I loaded the car silently. What was I doing, why was I upsetting the balance, why was I risking so much? I was terrified and devastated. I mumbled a weird goodbye of  very few words to my best mate, I couldn’t articulate anything resembling a proper sentence or even look at him,   I closed the door behind me.

Heart in my mouth and  tears streaming down my face I got into the car whereupon I forgot how to breath ,  my lungs were crushed. After 15 minutes I managed to calm myself and started the car. This was supposed to be my big adventure, my dream was  to live by the sea and I was doing it  so,  why was I finding it so hard to drive away? It felt like mourning and that’s exactly what it was, mourning the life I was leaving, fear of leaving the security of my normal and fear that things would never be the same again , that friendships might drift and I’d end up dying alone in Wales  but, at least I’d be by the sea right?

I’ve now been here for four weeks, I stopped crying a few miles into my journey, unpacked, explored, spent time with Welsh pals and started my new job.   This is what I’ve discovered since I arrived.

I cannot walk, run or cycle up hills. On my first week an old man with a walking stick almost overtook me just walking up my street from the shop.

Swansea rubbish collection is so complicated that nobody understands it. I thought I’d got a handle on it until the binmen refused to take my bags because I’d done some unfathomable wrong. I’m now hoarding rubbish and don’t know what to do with it. I might drive it to Liverpool with me at Christmas! Sorry mum

Gower animals are hardcore. Driving across the common in the darkest of dark on Gower  I had to stop for sheep, cows and horses. These little furry bad asses are not like English ones who go to a little shed at night, oh no.  Gower animals wait in the dark and cold  until your are driving along a lonely road, a lonely road a bit like a horror film lonely road.  They then jump into your path and laugh at you while you sit nervously  in the dark waiting for them to move.  I love them.

Welsh people are the friendliest folk I’ve ever encountered from shop workers to strangers in the park, everyone is up for a chin wag. Other drivers smile at you and let you out and people don’t seem to be as impatient and in a rush as I’m used to. I like it. Although I’m spending a lot of time alone which is to be expected at this point in my move,  the friends I made here over the last few years are amazing and the new folk I’ve met couldn’t be more welcoming.

The reality of living by the sea it seems,  is that you don’t surf as much as you think you will. We wait, patiently through flat spells and despair at work when swell hits on a weekday and it’s dark outside before you have even finished. Then, when swell comes on a weekend it’s too big. I am however, finally getting in tomorrow with my new board. 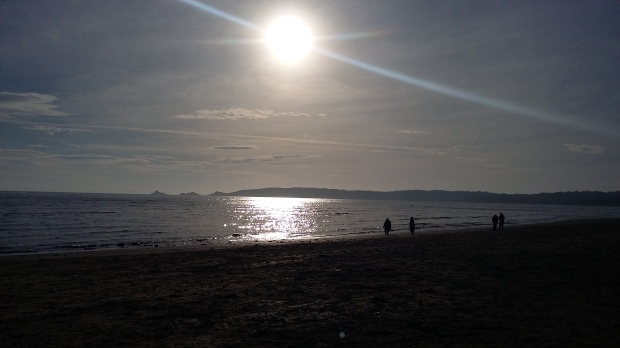 I was just wrapping up this post and was writing  about how I desperately miss my best friend, I had a little tear rereading the top of this post remembering the day I left Leicester and the absolute weirdest thing happened. I was interrupted writing by a whatsapp from a number I half recognised.  It was a very dear, old friend I’ve not spoken to for ten years, he lives abroad, our numbers changed over time and he doesn’t do social media.  We have searched for each other over the years to get in touch but with no luck. Today he found an old sim in a box and found my number . I’ve had a lovely hour catching up and plan to visit soon.  So, on a last note  of things I’ve discovered since moving,  I guess the most important thing is that time and distance don’t mean a thing when it comes to people we love. It’s going to be ok here.

6 thoughts on “I Moved to Wales”