I have now been living in my new home of Wales for 8 weeks. January is a slow and dull month at the best of times and last week was not the best of times. I’ve just experienced what I think was a  post relocation crash, triggered by a tough week that had me dramatically weeping while walking through the park with a flat tyre on my bike on the way home from work and looking at jobs and flats back in Leicester at one point. I’m sure most people who relocate get this feeling at some point.

Settling into my new role at work has been a struggle as I’ve come into a department with a lot of shall we say, issues. My crazy landlord has made it impossible for me to stay in my flat so I’m  now looking to move again meaning my sense of home is once again disrupted. I feel more at home in the car park of my favourite beach, mind you I think a lot of folk spend more time there than in their own homes.

My social life is pretty limited,  by that I mean I have one proper friend, others are the people I see in the sea or in the car park.  The sparks of potential  friendships are there, they are just little lights in the dark right now. Apart from a few hours on a weekend I’m alone the rest of the time and I got really fed up of it this week. I’m usually pretty good in my own company but, perhaps it’s never gone on for this length of time.  Friends from home  just assume I’m living the life, surfing with dolphins through sea spray rainbows but, I’m mostly home under a blanket watching youtube videos of cats in boxes. This weekend I spent about 5 hours with Welsh Surf Bird and we had a great morning but, it’s now Sunday night and I’ve not spoken a word to anyone since. I’m sure it’s  pretty normal at this point in moving to a new town on your own but, bloody hell it’s hard going sometimes. I learnt this weekend though that it doesn’t take much to turn it around.

Yesterday I picked Welsh Surf Bird up early and we  surfed a new break for me, there were some delightful little waves perfect for my longboard. We stuffed our faces with cake and hot chocolate next to the fire afterwards and I chewed her ear off with two weeks worth of stored up chatter. Lush. 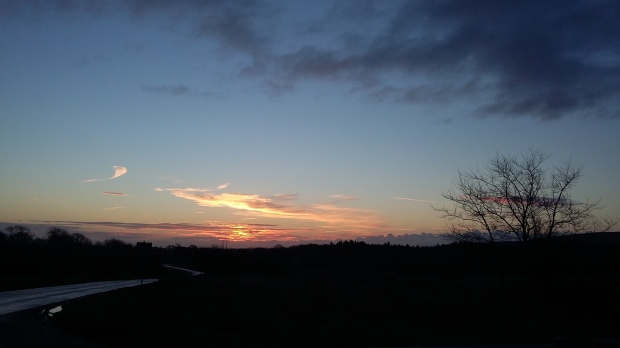 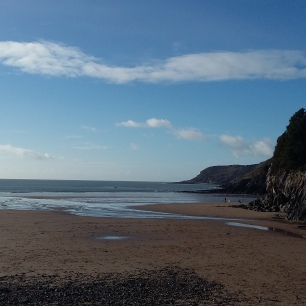 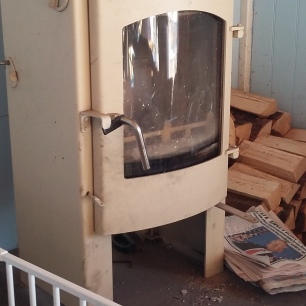 While we were in the water, looking back at Caswell and out towards the sun peeking around the headland I looked over at Welsh Surf Bird and, alluding to my situation she confirmed exactly what I was thinking, ‘this is why you’re here, don’t let anyone spoil it’ .  My tough week, my dramatic weeping, the urge to get in the car and drive straight back to Leicester, it all washed  away and became nothing I couldn’t handle.  I drove home singing along to 21 pilots full blast with a big fat smile on my face. The sea is such a cleanser. This morning I got up early for round two, this time to surf alone, and now I feel restored to my normal optimistic self, ready take on a tough week and deal with it differently.

Anyone who has relocated will tell you that it’s not easy, there are huge highs at the beginning then crashes when you think you have a handle on your new situation and realise actually, you haven’t. Luckily for me, I have the sea and  it washes everything away as soon as you step in with your board under your arm and feel the energy of a wave under your feet. The sea is like a factory reset for people, we are restored to what we should be, what we could be and all of the unnecessary crap is removed.

The poor  sea though, everyone dumping their angst and problems in there. I like to imagine that all the negative that is washed away from us by the sea  is tossed around, recycled and thrown back at us as something marvelous, as waves. Like a ginormous recycling plant the sea is taking something we don’t need and turning it into something beautiful. So every time there’s a wobble at work I’ll be like yep that’s going to turn into a wave, landlord being a creep again yeah another wave,  feeling a bit homesick and missing the best mate, that’s another 10 waves. It’s rather a nice thought and one I’m going to use this coming week. Maybe you should try it to.

2 thoughts on “8 Weeks After Moving to Wales, Relocation Crash”

There was an error retrieving images from Instagram. An attempt will be remade in a few minutes.