Rummaging in junk shops on Saturdays while hung over is a common pastime for me .

I’ve found a lot of junk and a few treasures over the years but, today I found something more. Amongst all of the old wardrobes, odd chairs, teapots with no lids, piles of dusty books and random golf clubs I saw two travel trunks . Proper,  old fashioned, steamer travel trunks, the type you’d imagine Pilleas Fogg or gentleman explorers with swirly mustaches and Panama hats to have hauled around the world . Whether or not these trunks have seen Blackpool or Buenos Aries,  Clacton on  Sea or Cairo  I’ll never know.

Team Surfabella’s artistic guru, otherwise know as  Long Legs has been looking for a trunk for a while so as soon as I saw these ones I called him to haul his ass up to the junk shop and take a look. As I stood guard over the them to avoid a gazump  I looked inside. Sifting  through old cd’s and empty photo frames, a few plates and some knives  I wondered where the trunks had been, who owned them, where they lived, what were their lives like, how was it that their personal belongings had ended up in a junk shop. The banality of the items gave me a bit of a pang, objects not of great value but, from normal life.  A plate,  maybe used for Christmas dinner, an empty photo frame that might once have held a loved one in a photograph.  At the very bottom of these remnants,  I found an envelope marked birth certificates and a postcard from ‘mother’. I’d made a unexpected connection with the owners. I felt a bit weird holding the envelope,  finding out their names would give the trunk a story. Maybe Long Legs didn’t want a story with his purchase. I was unable to resist. Alfred and Joan were born 1914 and 16 respectively. 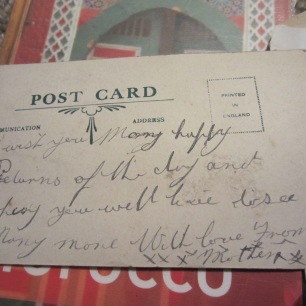 I put the envelope back where I found it as Long Legs arrived and I quickly told him what I’d found and how sad I thought it was, why had their birth certificates been thrown away? Didn’t they have any family? Blah,  blah , blah, blah….. Quite used to my nonsense he was not greatly moved by my sentimental  ramblings or intrigued like I was but, bought one of the trunks nonetheless.   Emptying the contents out of it  for the sale to be made , the shop oike  dropped the envelope on the floor and stood on  it with his big, fat,  dirty trainers. It made me so sad, these were people who lived a life, they meant something to someone and now some stranger was just standing on their stuff.  Long Legs, (now seeing where I was coming from)  and I did some looks and pulled a few funny faces between us when we saw his  foot on the envelope so  he asked if we could have it. We decided I’d have the birth certificates and he’d take the trunk . This somehow seemed right.  Someone had to remember them so why not me, even though I hadn’t met them.
In my head Alfred and Joan had a great life, they were childhood sweethearts who had met at school.  They never had children but, they had a full and fun life. They had many friends and were renowned for throwing a good party. Joan liked a G & T or two. They  travelled in a time when travel was less common, they did a grand tour of Europe and took the Trans Siberian Express, they rode camels in the desert  and trekked across Patagonia. They were inseperable and in their later years, when their bodies were weary and their memories less sharp they would look at the travel trunk and remember the adventures they had together. Or maybe they just used them to move house, who knows? It really doesn’t matter, nor does it matter why their lives ended up on a junk shop floor.  I’ll keep Alfred and Joan’s  birth certificates and postcard on my book shelf, inside a rough guide to Morocco.  I hate the thought of them being  discarded  and  being forgotten as if they had never been here.
It’s a nice thought to imagine that even after I’m gone someone else who didn’t know them will remember them. One day someone is going to go through my belongings. They will  come across Alfred and Joan’s envelope , read their names aloud  and wonder who they were to me.